Penguins are flightless seabirds. The little penguin is the smallest of all penguins. 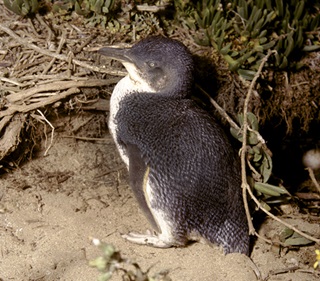 Standing about 30 to 35cm in height, the little penguin weighs approximately one kilogram when fully grown.

Its upper body and flippers are slate blue or blue-grey in colour, with the underside and throat being white. The little penguin's bill is black, its feet are pale pink, and its eyes are silvery-grey. The males of the species are slightly bigger than the females, and have a deeper bill and larger head.

The little penguin makes a variety of noises for different situations. It has a short, sharp bark when at sea; it uses a variety of throbbing growls and hoarse whoops when attracting a mate; and if it is disturbed it lets out a sharp, snorting yelp.

The little penguin is the only penguin species that breeds on the Australian mainland. Little penguins are found along the southern coasts of Australia, from near Perth in Western Australia to around Coffs Harbour in northern NSW. They also occur in New Zealand.

Originally, little penguins were fairly common on the Australian mainland, but these days their colonies are generally restricted to offshore islands. Approximately 25,000 pairs nest on islands off the coast of NSW. The largest colonies are on:

Currently, the only known mainland breeding colony in NSW is in a secluded cove in the Manly area of Sydney Harbour. This colony has been declared an endangered population.

The birds usually nest in burrows. They often set up their colonies in sand-dune vegetation, but they can also be found among rocks, in sea caves, and on headlands. A typical penguin burrow consists of a tunnel that leads to a nest bowl which is large enough for the penguin to stand up in. In rocky areas and in sea caves, the burrow may be a collection of twigs or a nest between large rocks. Sometimes even man-made structures, such as the cavities under raised houses, are used.

The ocean is the little penguin's natural environment. Their wings have evolved into flippers with which they propel themselves - 'flying' underwater. The birds are excellent swimmers, and are able to survive at sea for long periods. They generally spend the day at sea and return to their colonies after dark. On land they stand upright, walking or waddling awkwardly on their hind legs.

Little penguins feed on small fish, squid and krill (tiny shrimp-like crustaceans). They mainly feed in shallow waters within 15 to 20 kilometres of the coast. They hunt near the surface for fish such as pilchards, anchovies and garfish. They can also quickly dive to the sea floor to feast on squid and krill.

Little penguins live for an average of seven years, and are ready for their first breeding season at around three years of age. Most of the birds have the same mate for life, but about 25% of them may change their mate from year to year.

Between June and August, male penguins return to their colonies to reconstruct old burrows, dig new ones and attract mates. The breeding season varies from year to year and from colony to colony, depending on the availability of food.

For the 35-day incubation period, both males and females take turns incubating the eggs. On hatching, the penguin chicks are very weak, and cannot raise their heads. Their eyes open at one week of age.

Until around 15 days after hatching, one parent will remain with the young chick while the other goes hunting for food. After this, the young are left alone while both adults go hunting.

Chicks leave the nest to go to sea once they reach the age of 8 or 9 weeks. Before they leave the nest (a process called fledging), little penguin chicks tend to be brownish in colour. They later take on a similar colouring to the adults, only slightly duller.

Once the young have fledged, the adult penguins prepare to moult (shed their feathers to grow a new coat). The penguins feed themselves up to build a store of fat which will carry them through the period ashore, while moulting and waiting for a new feather coat to grow.

Little penguins face a number of threats. On the mainland, dogs, cats and foxes pose the greatest threat by attacking the adults and chicks. The death of one adult in a breeding pair will often lead to the death of the young. Other threats include: 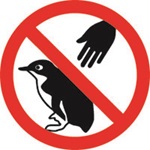 If you are near a little penguin colony, you can help protect these native seabirds:

If you would like to help the research program into little penguins, contact the Foundation for National Parks and Wildlife, which has established a fund for research and recovery work for the species.

Find out which areas around Manly have been declared critical habitat, what this means, and how you can help Sydney's little penguins.