Lord Howe woodhens are flightless brown birds about the size of a bantam. Females of the species are slightly smaller than the males, and their chicks are covered with sooty black down. 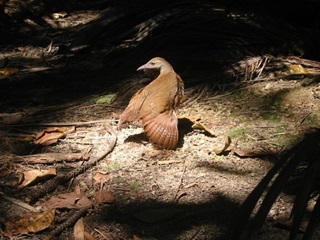 These birds are found only on Lord Howe Island, a World Heritage Area, which lies in the south-western Pacific Ocean around 700 kilometres east of Port Macquarie.

Before European colonisation, the species was spread throughout Lord Howe Island, populating the different subtropical rainforest environments. They could be found in a range of environments, from low-lying palm forests to mountain-top mist forests. They eat worms, molluscs and other invertebrates.

Lord Howe woodhens vocalise with a variety of high-pitched staccato calls. The territorial call consists of a series of loud, piercing notes given at any time of the day or night. When alarmed, the species may give a loud, long piercing note, and to maintain contact, individuals make a low, resonant grunting or purring.

Lord Howe woodhens feed on different types of insects, worms and other small creatures found in the forest.

Adult Lord Howe woodhens pair for life, and each pair defends a territory of around 3 hectares. The breeding season is between spring and early summer, and although most birds mate, a significant proportion of them do not successfully produce young. Nests are built in petrel burrows or in the hollows under tree roots, using grass, moss and palm fibre.

Because Lord Howe woodhens are territorial, their population is dependent on the number of breeding pairs that can be accommodated in any given area. Young adult birds will be expelled from their parents' territory. If they cannot take the place of an adult that has died, they will be forced to move to another area to find their own feeding grounds.

The ancestors of the Lord Howe woodhen arrived on Lord Howe Island many thousands of years ago, flying across the Pacific Ocean. They thrived in the subtropical rainforests of the island, where there was plenty of food and no fear of predators. Their wings gradually receded and became useless, because there was no longer any need for them to fly.

This situation changed in 1788, when HMS Supply anchored at Settlement Beach and members of her crew came ashore in search of food and water. Lord Howe Island's bird life had never been hunted, and was not afraid of humans. The Lord Howe woodhen, together with the now-extinct Lord Howe pigeon and white gallinule, provided easy game for the sailors.

Lord Howe Island was settled in 1833-34, and Lord Howe woodhen numbers quickly declined to near-extinction, because:

By the mid-19th century, small numbers of Lord Howe woodhens could only be found in relatively inaccessible mountainous areas. By the late 1970s, there were fewer than 30 Lord Howe woodhens on the island. The birds were confined to the summit regions of its two mountains (Mount Gower and Mount Lidgbird).

In 1966, the International Union for the Conservation of Nature (IUCN) classed the woodhens as endangered. They were later put on the IUCN's highest priority list.

In 1978, the NPWS, with help from the Lord Howe Island Board and the Foundation for National Parks and Wildlife, began a detailed study of the Lord Howe Island woodhen. After 2 years of research, a captive breeding facility was built in the centre of the island. Standing in an area of natural forest with plenty of leaf-litter animals like spiders and insects, the facility provided the birds with a good supply of food.

In 1980, three healthy pairs of Lord Howe Island woodhens were brought down from Mount Gower by helicopter. Settling in well at the breeding facility, they began laying eggs a few weeks after arriving. The eggs were cared for by both parents, and then were put in an incubator for the last week before hatching. By late 1980, 15 healthy chicks had been hatched.

The second stage of the project began in 1981, when two pairs of the captive-bred birds were released in an area under the cliffs of Mount Gower. Surveys had shown that this was the best site for a new woodhen colony. The birds survived and by 1984, 82 woodhens had been released. The breeding facility was closed.

Meanwhile, feral pigs and cats had been removed from the island, the feral goat population had been significantly reduced, and domestic cats were being phased out.

Since then, the NPWS and the Lord Howe Island Board have been counting the number of Lord Howe Island woodhens once or twice each year. They are breeding well, and the population reached over 200 in 1997. The birds are now living in many parts of the island, including residents' back yards.

The numbers of Lord Howe Island woodhens declined in April 2001 to 117 individuals. Further monitoring is being carried out to see if numbers have stabilised.

Learn more about the Saving our Species conservation project for the Lord Howe woodhen.