The lyrebird is one of Australia's best-known birds and is a great mimic, capable of imitating almost any sound. 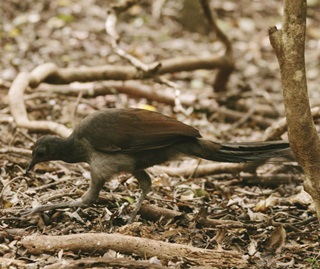 There are 2 species in the family of lyrebirds: the superb lyrebird and the Albert's lyrebird.

It is the superb lyrebird which gives the family its name. Its spectacular tail of fanned feathers, when spread out in display, looks like a lyre (a musical instrument of ancient Greece).

The male superb lyrebird is 80 to 100 centimetres long, including his 55-centimetre-long tail. He is dark brown on the upper part of his body and lighter brown below, with red-brown markings on his throat. His tail feathers are dark brown above and silver-grey below.

Females of the species are smaller than the males, with similar colouring but without the lyre-shaped tail. The females' tail feathers are broadly webbed with reddish markings. Young male superb lyrebirds do not grow their lyre tails until they are 3 or 4 years old. Until this time, they usually group together and are known as 'plain-tails'.

Lyrebirds are capable of imitating almost any sound. As well as their own calls, clicks and song, you will usually hear them mimicking loud clear sounds made by other birds and mammals, including humans.

They have been heard to mimic the sounds of chainsaws, horns, alarms and even trains.

They sing throughout the year, and scientists think that the mimicry helps them to vocally set out their territory and defend it from other lyrebirds.

In New South Wales, the superb lyrebird is found in rainforest areas.

Lyrebirds feed mainly on ground-dwelling insects, spiders, frogs and other small invertebrates, which they find by scratching among the leaf litter. They have powerful legs with long toes and claws, which are ideal for raking over dead leaves and soil. 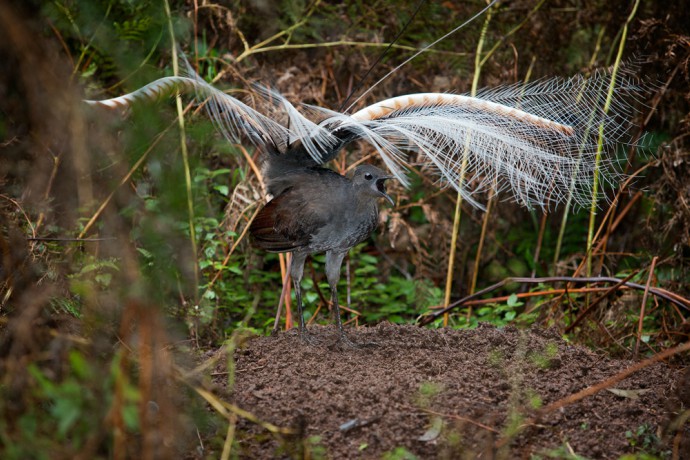 The superb lyrebird has an elaborate courtship ritual centred around a display mound. Built by the male bird, this display mound is made of scratched earth and measures up to 90 centimetres wide by 15 centimetres high. Each lyrebird territory may include 10 to 15 display mounds, which the displaying male may visit in turn. When courting, the male bird stands on a mound, spreading its tail over its head and singing a loud, clear song for as long as 20 minutes.

A male Albert's lyrebird builds a display panel of trampled vegetation. Its song and displays are comparable to those of the superb lyrebird, although its song is less varied.

The display period for both species is from May to August, with breeding occurring mainly in June and July. Females are attracted to the mound by the male's display and song. Male birds will mate with several females and, although they appear to know where the nests are, they take no part in building them or incubating and feeding the young.

The female builds a dome-shaped nest of sticks, which can be on the ground, on rocks, within tree stumps or in tree ferns and caves. The nest is lined with ferns, feathers, moss and rootlets. Usually, only one egg is laid, which hatches in around 6 weeks. The young lyrebird remains in the nest for 6 to 10 weeks.

Keeping out of danger

Lyrebirds are shy birds. When threatened, they escape by running and dodging rapidly through the undergrowth and emitting high-pitched shrieks of alarm.

With their short, round, weakly muscled wings, they rarely fly. However, their wings allow them to jump onto tree branches or rocks and then glide back down to the forest floor.

Some people living on the edge of the bush are lucky enough to have lyrebirds visit their gardens. Finding out about their way of life and listening to their fantastic mimicry can make living with lyrebirds a rewarding experience. Sometimes, however, these birds rake up garden beds, knocking over seedlings and leaving leaf litter everywhere.

To prevent this from happening, you can put up wire fences around plants to protect them, make a temporary barrier with potted plants or lay chicken wire over the garden beds. Lyrebirds will be encouraged by open compost heaps, so keep your compost covered or use a compost bin.