Malleefowl build nest mounds to incubate their eggs, using a complicated system to keep the mound at the right temperature. 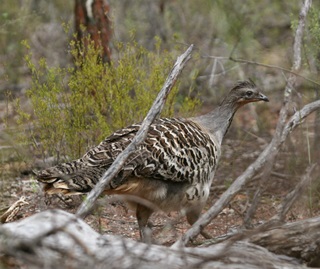 The naturalist John Gould called the malleefowl the 'spotted egg-leaver', a term which describes its appearance and curious breeding habits.

Growing to 55 to 60cm, with a weight of up to 2.5 kg, the malleefowl (Leipoa ocellata) is a large bird. Its head and neck are buff-grey, while its body is a dappled brown-black and white. It has keen hearing and eyesight, enabling it to detect dangers well in advance. If threatened it will sneak away, relying on its camouflage. The malleefowl is a strong flyer, but it prefers to run at a fast, lumbering pace if startled.

A recording of the birds' sounds is available on the Malleefowl threatened species profile.

Although they were originally found widely throughout Australia, malleefowl are now mostly limited to areas of inland semi-arid scrub. They prefer a dry environment with low-growing eucalypt trees and shrubs, referred to as mallee country.

More information about distribution and habitat, including a map of known and predicted distribution, is available on the Malleefowl threatened species profile.

During mid-summer and autumn, malleefowl feed mostly on ants and the seeds of wattle and senna plants. With the onset of the cooler weather and the winter rains, their diet becomes more varied, and they can eat flower blossoms and herbs as well as beetles, cockroaches, other invertebrates and lerp (the sugary caps of sap-sucking leaf insects).

When most animals are sheltering from the blazing heat, the malleefowl is busy moving tonnes of sand and debris to build and maintain a nest mound, in which the female lays her eggs. Malleefowl nest mounds can be over 1 m in height and 4 m across. The male buries wet leaf litter in the mound, which gives off heat as it rots, acting as a natural incubator for the eggs.

In spring, much heat is given off by the rotting leaves, and the temperature must be reduced. At dawn, the male digs down near the eggs, and after allowing enough heat to escape he refills the hole with cool sand.

In summer, the male needs to protect the eggs from the heat of the sun. He adds more and more sand to the mound, which absorbs the sun's warmth. Then, in the cool of the morning, he removes the sand and scatters it in the colder air. When the sand has cooled down, he puts it back on the mound.

During the falling temperatures of autumn, the mound needs to be warmed up. To do this, the male digs almost all of the soil away in the morning, spreading it out to be warmed by the sun. Throughout the hottest part of the day, he places hot layers of sand on the mound so that as the sun goes down the nest has been rebuilt and is warm for the night.

While the male is keeping the temperature of the mound constant, the female is busy laying eggs and helping with the digging. Generally, an egg is laid every 4 to 8 days. A female malleefowl lays between 15 and 24 eggs in a season, though the number will vary depending on the availability of food.

The dangerous life of a malleefowl chick

The malleefowl parents rarely get to see the results of their labour because they abandon the nest and any remaining eggs when the critical temperature of the mound can no longer be maintained. When the eggs hatch, the chicks dig upwards to climb out of the mound, which can take up to 15 hours. They then begin a solitary life, independent of their parents. They can fly within hours of hatching.

Many eggs hatch, but very few of the offspring survive. Relying only on camouflage for defence, malleefowl chicks are easy prey for foxes.

Due to the clearance of mallee vegetation (the principal habitat of the malleefowl) and predation by foxes, the malleefowl is now endangered in New South Wales.

We have conducted surveys into the declining numbers of this species and are researching ways to reverse the trend. An ongoing recovery program has resulted in the breeding of the first captive malleefowl, in Western Plains Zooat Dubbo.

Nearly 200 captivity-bred birds have been released into Yathong Nature Reserve, where fox numbers have been reduced by broadscale baiting. It is hoped that this release will help make the population of malleefowl more secure. In the meantime, we are continuing to monitor malleefowl mounds and control foxes in the south-west mallee of New South Wales.

Help save the Malleefowl (Leipoa ocellata)

This conservation project aims to secure the malleefowl in the wild in NSW for 100 years, engage local communities in its conservation, and encourage the NSW community to identify with it as a flagship for threatened species conservation. 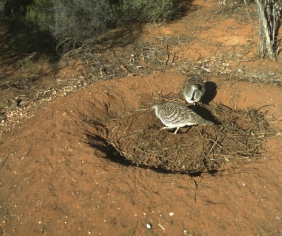 The malleefowl and the fox

The Malleefowl is a Saving our Species Iconic Species. This short video is a series of consecutive images from one of our monitoring cameras...