The purple copper butterfly is only found in the Central Tablelands of NSW. Its habitat is restricted to elevations above 900 metres. 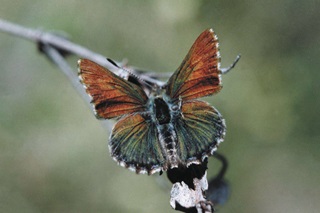 The purple copper butterfly (Paralucia spinifera) is a small butterfly with a thick body, and a wingspan of only 20-30 millimetres. The upper sides of its wings are black or deep brown, with a bronze or green iridescence when they're sunning. The undersides of its wings are patterned with subtle brown, black, and grey. Its black antennae are dotted with white spots, and terminate with a black tip.

Adult males fly rapidly at about 1 metre from the ground and rest in the sun with their wings parted. Females fly less rapidly and tend to stay closer to the host plant. Adults usually fly on warm cloudless days in September, around the middle of the day (10am to 3pm). Larvae can be found crawling up blackthorn stems and feeding on the leaves from 10pm to 5am between November and January.

The butterfly's life cycle relies on a 'mutualistic' relationship with the ant Anonychomyrma itinerans, and on the presence of blackthorn.

When fully grown, the larvae return to the ants' nest to pupate from January until the butterflies emerge between August and November (later at high altitudes).

Conserving the purple copper butterfly and its habitat will require more information on the butterfly and a good deal of involvement from the local community. As the purple copper butterfly was first described by scientists only recently (1978), there are significant information gaps in the areas of population dynamics, habitat requirements, nature of the relationship with and ecology of the attendant ant, and fire ecology.

Community awareness and involvement is one of the key priorities in the purple copper butterfly recovery effort. The owners and managers of the butterfly's habitat are the first and most important community group. The informed support of habitat owners is the butterflies best protection, but general community interest is also vital.

Butterflies are not only a beautiful insect but play a number of roles in the environment. They act as a pollinator; as a food source for other species; and are an important indicator of a healthy ecosystem.

The Bathurst Copper Butterfly, Paralucia spinifera, is only found between Bathurst and Hartley in the Central Tablelands of New South Wales.