Shearwaters are well-known wanderers of the sea. About 10 species can usually be seen along the NSW coast, diving into the water or skimming across its surface. 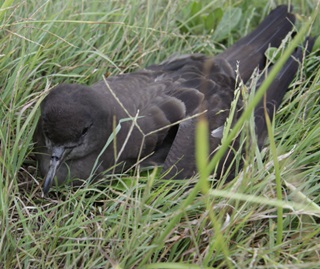 They can be recognised by tube-like nostrils at the base of their beaks. In most species, the top of the wings, back and head are dark brown in colour. The lighter colour of the underbody varies between species.

Shearwaters earned their name by their ability to cut - or shear - the water with their wings, although until recently they were known as 'muttonbirds'. This name was given to them by early European settlers, who killed the birds for food and found that their flesh tasted like mutton.

All shearwaters fish for their food. They have various fishing techniques - they can dive while in flight, or dive while swimming on the water's surface, or 'fly' underwater with half-open wings.

Fish, squid, crustaceans, molluscs and plankton form the main part of their diet, but some species of shearwater follow ships for scraps or scavenge for food at offshore waste-disposal points.

The hazards of migration

Shearwaters travel far and wide to places such as Antarctica, Siberia, Japan, South America and New Zealand. This often puts their lives in danger. After gales or during food shortages, dead birds are often found along the coast. In some years, enormous numbers of short-tailed shearwaters can be found dying or dead on the beaches along the coast of NSW.

The reasons for these deaths are not entirely clear, but scientists think that starvation and exhaustion on the birds' southerly migrations are the main causes. Adults migrate south to their breeding islands during October, and although they stock up on their food supply in the northern hemisphere, they do not find a lot to eat on their way south. Forced to fly into strong winds, the weaker birds are unable to reach their breeding grounds in Australia. They end up as casualties along our coast. This is natural selection at work. It ensures that only the strongest birds survive to breed.

Non-breeding and immature shearwaters migrate south some months after the breeding adults.

Usually shearwaters only visit land to breed. They establish colonies on remote islands, capes or coastal mountains in places where take-offs are helped by winds and there are few land predators.

Four species breed on islands off the NSW coast

Shearwaters lay only a single egg in burrows and rock crevices or less commonly, under grass, bushes or sometimes in the open. Many species spend the day feeding out at sea and only return to their nests at night. Some species, like the short-tailed shearwater, gather together in the afternoon before flying ashore at dusk.

Although shearwaters are usually quiet birds at sea, their breeding grounds become very noisy, full of strange cackling, cooing, wailing or screeching sounds. You can visit a wedge-tailed shearwater breeding colony on Muttonbird Island near Coffs Harbour. This island is connected to the mainland by a breakwater, and visits can be made at night, providing visitors stay on the walking track.