Each year between April and November, Australia's eastern coastline comes alive with the spectacular acrobatic displays of humpback whales. 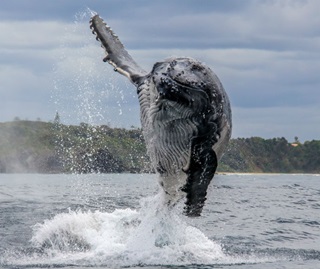 The humpback whale is one of the most easily recognisable of the large whales.

Often the first sign of its presence is its 'blow', a cloud of vapour that it shoots into the air when it breaks the surface to breathe.

Humpbacks get their name from the humped area of blubber anterior to their dorsal fin that is accentuated by the arching of their backs when diving.

Humpback whales can launch themselves out of the water in a spectacular motion called breaching. There are theories as to why whales breach. They may be communicating to other whales across vast distances, trying to attract other whales (including a mate), warning off vessels or other mates, cooling off, removing parasites such as barnacles, or just playing! Seen from any distance, this action is one of the most dramatic and awe-inspiring in the animal kingdom.

The features of a humpback whale are:

Humpbacks are rorquals, whales which have distinctive throat grooves. They have up to 35 broad ventral throat grooves, extending at least to their navels. Their bodies are more robust than those of other rorquals.

Humpback whales are one of the most exuberant of all whale species, and are celebrated for their energetic antics and haunting 'songs'.

During migration, male humpback whales often 'sing' complex, lengthy and distinctive songs to communicate their presence to females to entice them to mate. They use syllables and rhyming phrases with a complex sequence of clicks, moans and eerie high-pitched wails that can last for a few moments or an hour. The sounds range from canary-like chirps to deep rumbling sounds that carry for hundreds of kilometres. The 'songs' change subtly each year and different humpback populations have different songs.

Humpbacks are baleen whales. They don't have any teeth, and feed by filtering shrimp-like krill between 270-400 baleen plates which hang from the top jaw. They feed in Antarctic waters on krill, but also eat small fish and plankton during their migration south from their breeding areas.

Humpback whales will often roll forward to dive until only the tail sticks out of the water. This is called a fluke-up dive.

The 'blow' of a humpback whale

Other common actions include:

When can you see them?

During the hotter months of the year, from November to May, humpback whales feed in the waters of the Antarctic. They then migrate north to their subtropical breeding grounds off the Queensland coast. You can see them off the NSW coast: 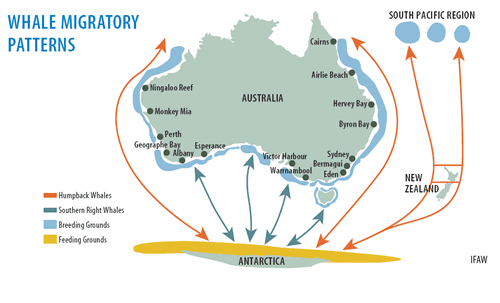 Humpback whales were nearly hunted to extinction. The last whaling station in NSW, at Byron Bay, closed in 1962 because so few whales could be found.

Humpback whales are now protected throughout Australia, and in NSW are listed as a vulnerable species under the Biodiversity Conservation Act 2016.