The NSW Koala Strategy - the biggest commitment by any government to secure koalas in the wild - is supporting a range of conservation actions that will provide more habitat for koalas, support local community action, improve koala safety and health, and build our knowledge to improve koala conservation.

Towards doubling koalas by 2050

Koalas in New South Wales face a range of threats, including habitat loss, fragmentation and degradation, climate change, disease, declining genetic diversity, vehicle strike, bushfire, and dog attack. These mounting pressures, exacerbated by the impacts of the Black Summer bushfires, and combined with historic declines, mean that without intervention, koalas could be extinct in New South Wales by 2050.

Taking urgent action, the NSW Government has set an ambitious goal to double koala numbers in New South Wales by 2050. The work to achieve this goal will be guided by a series of 5-year plans and investments. This strategy is the first in that series.

An investment of more than $190 million

The NSW Government has committed more than $190 million to deliver the targeted conservation actions that the strategy sets out. These actions work towards the long-term goal of doubling koala numbers in New South Wales by 2050. This funding is to 2026.

The strategy builds on the groundwork and achievements of the previous NSW Koala Strategy 2018–21, which comprised a $44.7-million investment over 3 years to stabilise koala populations.

The strategy delivers targeted investment and action under 4 pillars. These actions work together to secure habitat, support local conservation, reduce threats, and improve our knowledge. Investment and key targets under each pillar are listed below. 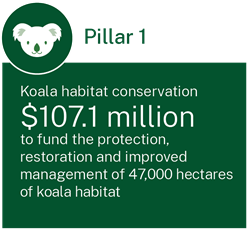 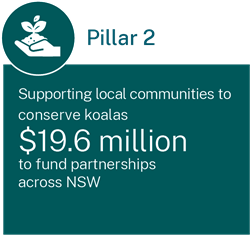 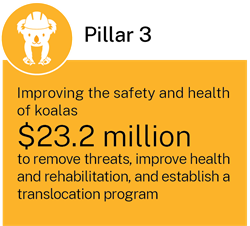 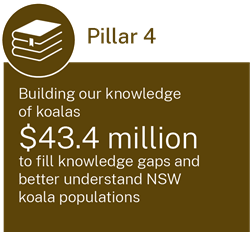 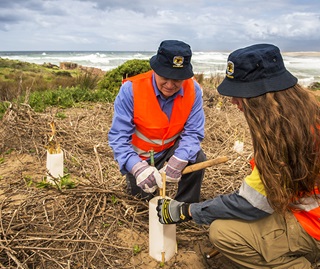 Under the NSW Koala Strategy, $107.1 million is being invested over 5 years to fund the protection, restoration, and improved management of more than 47,000 hectares of koala habitat.

Habitat loss and climate change are the most serious threats to koalas. Significant increases in koala habitat area and condition are needed to double koala numbers.

The NSW Government will permanently conserve areas of high-quality koala habitat in strategic locations by adding them to the national park estate. Land that can help establish and secure stronghold areas will be prioritised.

Private landholders with high-quality koala habitat in populations for immediate investment will be supported to permanently conserve their koala habitat. Support will be targeted towards stronghold areas and will occur via 2 programs administered by the Biodiversity Conservation Trust: Conservation Partners Program, and in-perpetuity conservation agreements with annual payments.

The NSW Government will purchase and retire 1500 koala credits from the biodiversity credit market, securing in-perpetuity protection for koala habitat.

The NSW Government will use partnerships to leverage private sector investment in koala conservation.

Taronga Conservation Society Australia will partner with the NSW Government to lead the largest ever box-gum woodland restoration and rewilding project. This action will deliver a landscape-scale restoration project, creating more than 5000 hectares of climate-change-resilient habitat for koalas and other threatened species. Koalas will be translocated to the site once the woodland is re-established.

These will be informed by best available koala habitat mapping such as the Koala Habitat Information Base and koala plans of management in priority local government areas.

This will mitigate habitat loss and deliver long-term habitat protection for koalas and other species that share their habitats.

The Minister for Environment and Heritage will establish one Area of Outstanding Biodiversity Value for koalas under the Biodiversity Conservation Act. This will help effectively manage an area that makes a significant contribution to the persistence of koalas.

The Minister for Environment and Heritage will establish 20 new Assets of Intergenerational Significance for koalas under the National Parks and Wildlife Act 1974. 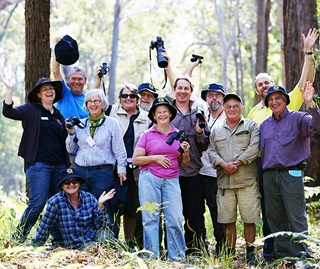 Under the NSW Koala Strategy, $19.6 million is being invested over 5 years to support local communities to conserve koalas and fund partnerships.

The NSW Government will deliver up to 8 regional koala conservation partnerships with councils, conservation groups, Aboriginal communities and other partners to ensure community expertise and knowledge inform on-ground actions.

The NSW Government will continue to work closely with the NSW community to protect koalas and areas of important koala habitat. Regional partnerships from Action 2.1 will engage communities in local koala actions.

The NSW Government will draw on expertise within Local Land Services and the Environment, Energy and Science Group of the Department of Planning and Environment to assist local councils in carrying out rigorous on-ground ecological assessments and appropriate community consultation to develop koala habitat maps and strategically conserve koala habitat in their local area.

2.4 Partnering with the Australian Government and other states expand

The NSW Government will continue to work collaboratively with state and federal governments to protect koalas throughout Australia. Koala management in other states and work led by the Australian Government can provide useful insights and opportunities for collaboration, such as completing the recovery plan for the listed populations of koalas, and establishing a national monitoring framework for koalas.

The NSW Government will partner with farming organisations to explore new ways to encourage landholders to protect koala habitat on their land while maintaining agricultural production values.

The NSW Government will support the involvement of school children and local Lions clubs in koala conservation through the Koala Smart program.

Under the NSW Koala Strategy, $23.2 million is being invested over 5 years to remove threats, improve koala health and rehabilitation, and establish a translocation program.

Koalas face various threats, including habitat loss and fragmentation, vehicle strikes, disease, dog attacks, fires, drought, and heatwaves. Improvements to the health and safety of koalas are required to better protect them from the impact of these threats.

The NSW Government will identify and take action at 10 or more vehicle strike hotspots across the State to reduce koala injury and mortality and improve the viability of koala populations.

The NSW Government will reduce attacks on koalas by domestic dogs by working with local councils to engage dog owners in key areas where attacks occur.

The NSW Government will work with Taronga Zoo to continue to deliver professional training in wildlife treatment for vets and vet nurses.

The NSW Government will work with wildlife rehabilitators and researchers to monitor rehabilitated koalas released back into the wild.

The NSW Government will facilitate the policy and regulatory pathways to support scientific developments to improve the health and viability of koala populations, including koala chlamydia vaccine trials, captive breeding of koalas and translocation in New South Wales.

3.7 Improving our approach to fire management to protect koalas and koala habitat expand

The NSW Government will develop bushfire management approaches to better protect koalas and their habitat while protecting people and property. The government will incorporate traditional ecological knowledge and cultural burning practices into these approaches. Improved understanding of the impacts of hazard reduction burns on koalas will help inform future hazard reduction burns.

3.8 Improving emergency response actions for koalas and other wildlife expand

The NSW Government will work with volunteer wildlife rehabilitators, vets and other partner organisations to enhance coordination of emergency response for koalas and other wildlife due to bushfires or extreme weather events.

The NSW Government will use the lessons from previous translocation research to undertake koala translocations. Translocations will be accompanied by special consultation with local Aboriginal groups. 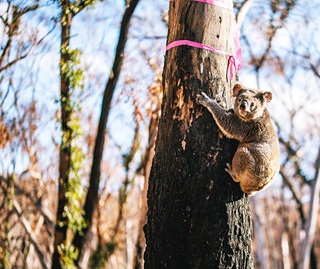 Under the NSW Koala Strategy, $43.4 million is being invested over 5 years to fill knowledge gaps and better understand koala populations.

Establishing a statewide baseline of population, disease, and genetic information for koala populations is critical to achieving the long-term goal of doubling the NSW koala population by 2050.

Identifying the most appropriate surveying and monitoring methods, and filling important knowledge gaps, is vital for informing strategy actions and evaluating their success.

The NSW Government will monitor populations, habitat, disease, genetic diversity and threats at a minimum of 20 sites across New South Wales, enabling future measurement of progress against the 30-year goal. A dashboard will track the effectiveness of actions delivered under this strategy.

The NSW Government will implement innovative and cost-effective methods to deliver a baseline of the current statewide occurrence, distribution and relative abundance of koalas within 3 years. This work will also collect baseline health and genetics status in up to 50 koala populations. The program will use the best available science and encourage private sector input.

4.4 Keeping our evidence base up to date expand

The NSW Government will continue refining and improving the Koala Habitat Information Base and supporting spatial and mapping products. This will include further refuge modelling to identify areas that may serve as refuges from fire, heat stress or drought.

The Natural Resources Commission will continue to deliver an independent research project to better understand how koalas respond to intensive harvesting on the NSW North Coast.

The NSW Government will support monitoring on Aboriginal-owned lands and facilitate the integration of traditional ecological knowledge into on-ground actions.

The NSW Government will continue to coordinate the delivery of koala genetic material to the Australian Museum through a new phase of sample collection and storage.

The NSW Government will partner with researchers, communities and other stakeholders to deliver a baseline map of genetic diversity to fill knowledge gaps in the first 3 years. The data will be open source for all researchers and koala rehabilitators to access and build on. This forms part of the baseline survey program.

The NSW Government will explore the links between conservation actions and their relative contribution to increasing koala numbers through effective monitoring and evaluation. This work will inform future prioritisation of investment and action. Research will be undertaken to identify least-cost pathways to protecting, restoring and creating habitat by understanding trends in habitat loss, relevant drivers and the likely viability of koala habitat by region.

4.10 Recognising the economic and cultural value of koalas expand

The NSW Government will deliver a study to quantify the market and non-market values of koalas to the NSW community, including cultural, reputational, intrinsic and Aboriginal values.

4.11 Innovation and leading the way with cutting-edge technology expand

This report summarises the key achievements of the NSW Koala Strategy in the first year of implementation to 30 June 2022. The report also summarises how actions will be delivered to 2026.

The NSW Koala Strategy sets out the first five-year plan to achieve our long-term goal of doubling koala numbers in New South Wales by 2050.

The final report summarises the progress in implementing the NSW Koala Strategy 2018–21. As at April 2022, all actions are complete or in progress.