Turning back the tide of extinctions in NSW national parks

A network of feral predator-free areas is one of several strategies in the NSW National Parks and Wildlife Service Threatened Species Framework to meet our commitment of zero extinctions and restore threatened species populations. Other strategies include:

The NSW Government is establishing a network of 7 feral predator-free areas across the state as part of a science-driven rewilding initiative.

Rewilding – the process of restoring natural ecological processes in the landscape – has already begun on 3 sites on national park estate.

Once all 7 sites are complete, almost 65,000 hectares of national park estate will be free of feral predators.

The network will provide a significant conservation benefit for more than 50 species – some of which have not been seen in the wild in New South Wales for over a century.

Cats, foxes and other feral animals will be removed from specially fenced areas, then native animals which are extinct in New South Wales, locally extinct or threatened, will be brought back into these safe havens. Resident threatened species will also benefit.

Right across New South Wales, native animals will be safely reintroduced to their native landscape after long absences.

The feral predator-free area project is one of the most significant ecological restoration projects in the state's history. 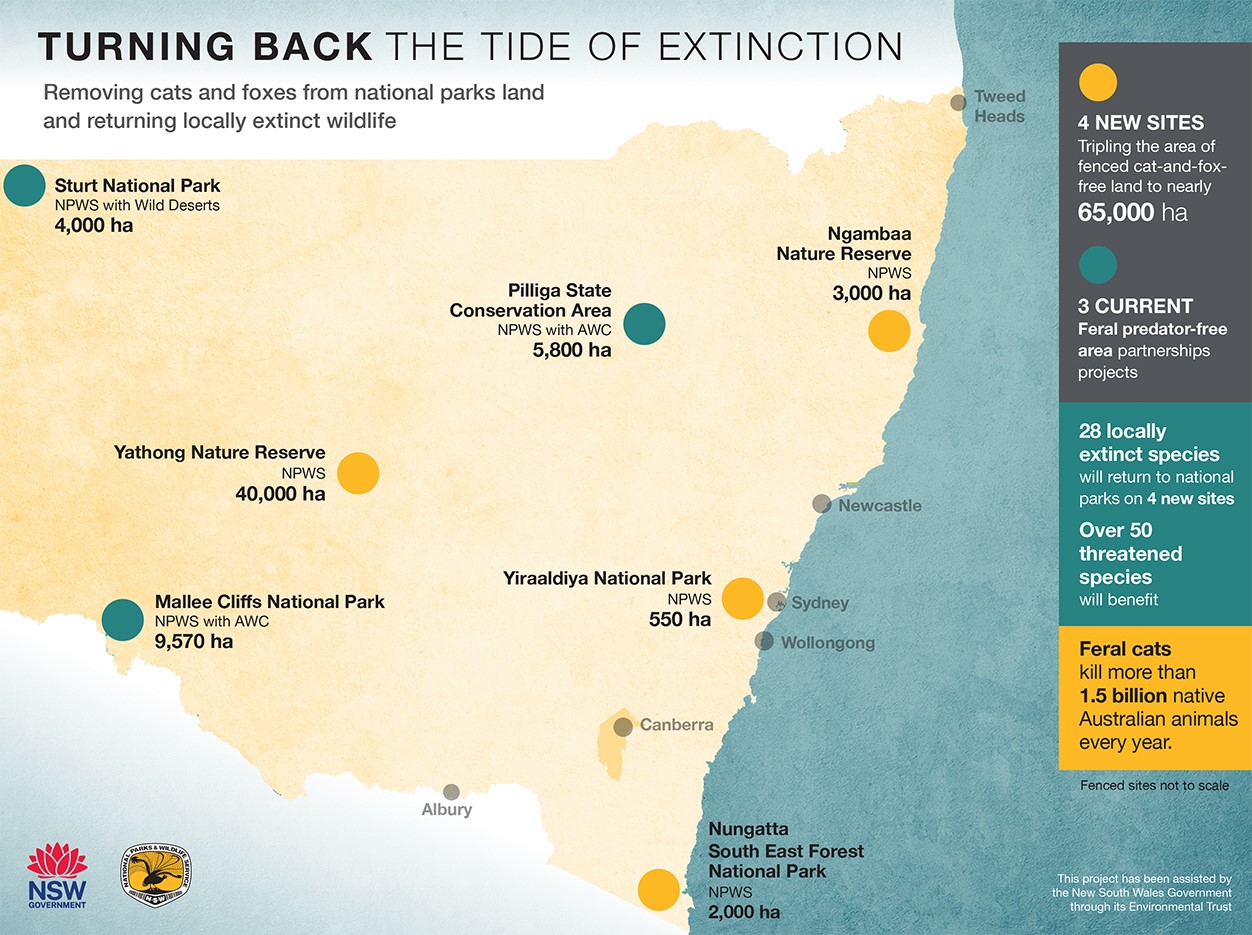 Three sites (see teal-green dots on the map) are managed in partnership between National Parks and Wildlife Service and either Australian Wildlife Conservancy (AWC) or the University of New South Wales (UNSW Sydney), operating as Wild Deserts.

National Parks and Wildlife Service is developing the other 4 sites (orange dots). Sites were selected to protect the maximum number of priority species while considering fencing feasibility. Future visitor access and opportunities to raise public awareness were also factored in. 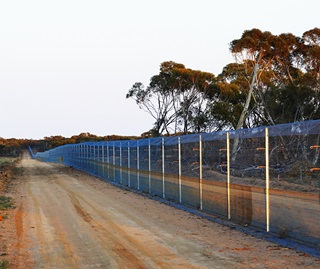 Why do we need these areas?

'Australia's extinction record is poor and we continue to experience global extinctions of endemic species.'
(Woinarski et al. 2017b)

Australia has the worst mammal extinction record in the world.

More than 10% of our native land mammal species are extinct. Our biodiversity continues to decline, and the number of species at risk of extinction continues to rise.

Each year across Australia, feral cats alone are estimated to kill more than 1.5 billion native animals.

The decline of our wildlife is occurring even in our protected areas. Some species are locally extinct across the national park estate, while others now occur in much lower numbers and are at risk of local extinction.

In 2020, an Australian Government Parliamentary Inquiry into the problem of feral and domestic cats in Australia recommended that governments work to expand the network of feral-free areas across a range of ecosystems and be ambitious in their scale. 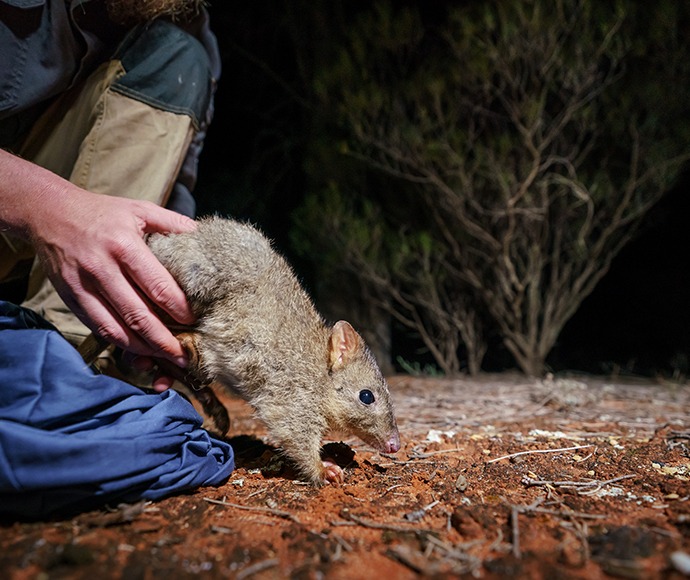 The call to expand feral predator-free networks is backed by compelling evidence for the importance of 'safe havens' across Australia.

One of the many locally extinct species coming back is the greater bilby – an 'ecosystem engineer'.

They have earnt their nickname through actions in the landscape. Greater bilbies dig burrows, aerate the soil, and create niches for moisture, spores and seed, or shelter for other species. All of this combines to help return the bush to what it was before.

Altogether, a total of 10 species, including burrowing species or 'ecosystem engineers' such as bilbies and bettongs, have been reintroduced to feral-free areas:

'They [safe havens] have prevented 13 mammal species from going extinct and have protected populations of 40 mammal species susceptible to cats and foxes.'
(Legge et al. 2019)

It's all about science and results, and there will be measurable project conservation benefits for at least 50 threatened animal species, including:

The 3 feral predator-free areas already established in New South Wales are showing early encouraging signs of bounce back of resident species, including small mammal and reptile assemblages, as well as abundance and occupancy of ground-dwelling birds.

Reintroduced mammals such as the greater bilby, bridled nail-tail wallaby, and crest-tailed mulgara are already establishing themselves in feral predator-free areas and are reproducing.

'Over 30 mammal species (>13% of all terrestrial Australian mammals, and all endemic) have been driven to extinction in the past 250 years. Cats and European red foxes (Vulpes vulpes) have been the main drivers for at least two-thirds of these losses.'
(Short and Smith 1994; Woinarski et al. 2015)

Feral cats and foxes are the key drivers of the decline of most mammals, and have a serious impact on bird, reptile and amphibian species.

Despite efforts, there is no effective strategy for landscape-scale control of feral cats, while landscape-scale fox control has mixed results and requires sustained effort.

The effective control of feral predators is essential for the recovery of many of our threatened species, especially mammals and ground-dwelling birds.

The impact of feral predation is compounded in areas where vegetative cover has been removed during drought, by feral animal grazing pressure, or in areas recovering from the impacts of bushfire.

'A network of islands and exclosures that are free of introduced predators is a necessary complement to the conventional reserve system, and is required in the short to medium-term to prevent extinction of predator-susceptible threatened mammal species.'
(National Environmental Science Program (NESP) Threatened Species Recovery Hub, 2018)

Until there is effective landscape-scale control of feral cats and foxes, the best available science says we need to establish more feral predator-free areas.

There is strong scientific support for establishing feral predator-free areas using conservation fencing as an essential component of any overall strategy to prevent further extinctions and promote the recovery of our most susceptible species.

Below, see the starkly different fates of 2 groups of wildlife, only one of which was safely enclosed in a feral predator-free area. The 2019 Threatened Species Mammal Index shows:

The feral-free areas will establish insurance populations of threatened species in the short and medium term until effective landscape control of feral cats and foxes is developed. 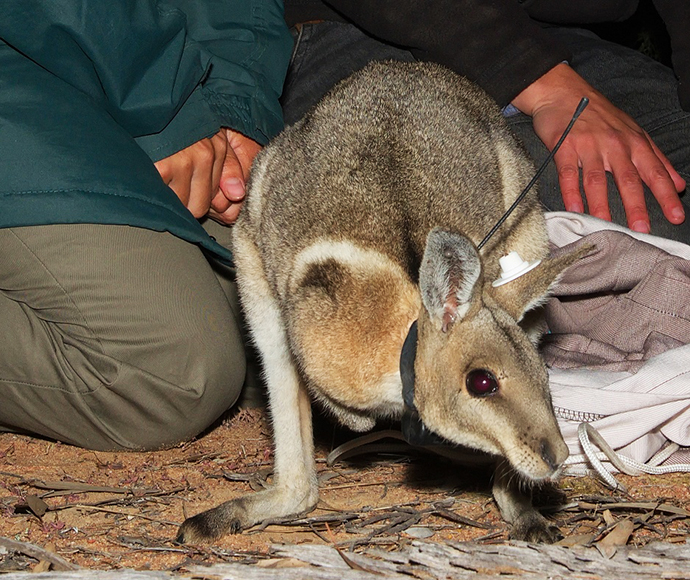 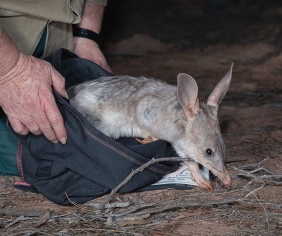 The most ambitious rewilding project in Australia is achieving incredible results, with 10 locally extinct species now thriving after being ...

The newest feral-free rewilding area in New South Wales is one step closer to welcoming locally extinct animals into the safe-haven, with fe...