The Old Great North Road is one of the best surviving examples of our convict heritage. The World-Heritage-listed section of the road occurs within Dharug National Park.

In 1825 the NSW Government began work on an inland road to connect Sydney to the Hunter Valley, a distance of 264 kilometres. Up to 720 convicts worked on the Great North Road and built stonework including buttresses, culverts, bridges and 9-metre-high retaining walls. The road was completed in 1836.

The Great North Road was not popular. It was isolated, had no permanent watercourses, and bypassed existing settlements. Coastal steamers became the preferred means of travel to the Hunter Valley, and by the time the road was completed in 1836 it was almost redundant.

The Old Great North Road is a 43-kilometre section that runs from Wisemans Ferry in the south to Mount Manning (near Bucketty) in the north. It runs within and adjacent to Dharug National Park and passes in and out of Yengo National Park. 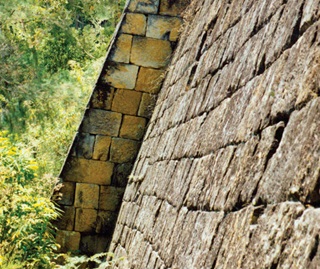 The Old Great North Road is one of 11 places that make up the Australian Convict Sites World Heritage property. The 11 sites were given World Heritage listing in 2010. The Devines Hill and Finchs Line sections of the Old Great North Road, which lie in Dharug National Park, are included in this listing – they are one of 4 New South Wales sites included in the Australian Convict Sites.

How the convict sites are managed

The Australian Convicts Sites Steering Committee manages the 11 convict sites, including the Old Great North Road. The Strategic Management Framework guides the management of the property.

Convict features along the road

There are numerous features along the Old Great North Road that attest to the massive amount of work done by convicts to build the road. These features include timber and stone culverts, cut stone drains, sandstone-block retaining walls, convict graffiti, bridges, stockade sites and camps that are not included in the World Heritage listing.

The original line of the Old Great North Road was surveyed in 1825 by the colony’s Assistant Surveyor, Heneage Finch. It probably followed an Aboriginal travelling route, and local Aboriginal people may have purposefully diverted the European road surveyors away from their sacred sites.

Finchs Line was the original ascent up the steep escarpment from Wisemans Ferry. Construction began in March 1828, carried out by the Number 25 Road Party and part of the Number 3 Iron Gang under the supervision of Lieutenant Jonathon Warner. The gangs worked from either end of the line.

Governor Darling inspected the route later in 1828, and found it too steep and winding. He demanded a new route be surveyed. Work was abandoned in January 1829 in favour of this new route, which travelled up Devines Hill.

The middle section of Finchs Line was never completed. However, enough work had been done for the route to be used by travellers while the Devines Hill road was being constructed.

The Devines Hill route, with its steep 1.8-kilometre ascent, was selected by Surveyor General Sir Thomas Mitchell. Over 500 convicts, many in irons, constructed the road. It features impressive 9-metre-high buttressed retaining walls and an elaborate drainage system.

Clares Bridge is the second oldest bridge on mainland Australia; the oldest is on Wisemans Ferry Road, near the start of Devine’s Hill. Clares Bridge was built between January and September 1830, and is named after Arnold Clare, supervisor of the convicts who built the bridge.

The bridge’s sandstone blocks were quarried from an outcrop above it. Jumper marks, split rock faces, shaped stone and unsplit wedge pits remain from this work.

Large cobblestones underneath the bridge prevent its foundations from being undermined during heavy water flows.

The Convict Trail Project, a community project that began in the 1990s, completed conservation works on Clares Bridge in 2004. This included removal of steel decking and reconstruction of the western side of the southern abutment.

This area was used as a stockade site where convicts camped, while the road was being built.

Solomon Wiseman, after whom Wisemans Ferry was named, was given 100 acres here to set up an inn. It is not known whether the inn was ever built, but sandstone foundation blocks can be seen amongst the bracken ferns. It’s possible the foundations are from an inn built by Samuel Paley, a convict who was given a ticket of leave and some land. Historical letters state that Paley had an inn here that was known by locals as the place to go to stay overnight and rest their horses.

A township called Snodgrass Valley was planned for Ten Mile Hollow, as a stopping point for weary travellers. Snodgrass Valley never came into being, but its proposed street names were Solomon Street, Eagle Street, and Bulga Street.

The same bridge-building party responsible for Clare’s Bridge probably constructed this bridge in 1831. It has lost its original decking, but is still substantially intact and an impressive example of colonial engineering.

Conservation and erosion control works were carried out in the late 1990s by the NSW National Parks and Wildlife Service, the Convict Trail Project and Gosford City Council. This involved the replacement of several newly quarried and picked sandstone blocks that had been removed by vandals.

The Great North Road was built using convict labour between 1826 and 1836, spanning the 264-kilometre distance between Sydney and the Hunter Valley. The Old Great North Road is a 43-kilometre stretch of this road that retains some of the best examples of our convict heritage.