The community has a powerful and positive influence over river and floodplain health, through the Macquarie Cudgegong Environmental Water Advisory Group (EWAG). 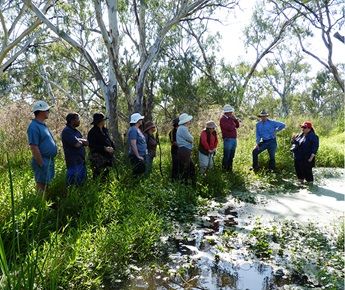 Members are drawn from a range of local interest groups to provide advice on planning, management and monitoring of water for the environment in the mid and lower Macquarie valley.

'The Macquarie has been a leader in water for the environment in Australia, with releases from Burrendong Dam to benefit the Macquarie River and Macquarie Marshes since the early 1980s.

'The EWAG was formed in 2000 and formalised in 2004, though the community has had a role in decision-making since the late 1990s.

'Members have contributed to meeting the river's needs across a wide variety of weather conditions and water availability – from the millennium drought through to the 2010 floods and back to the comparatively dry conditions of 2013-14.

'The EWAG is called upon to make highly complex decisions – particularly during drier years – that affect the health and resilience of rivers and wetlands throughout the catchment.'

The group is chaired by Ian Rogan, a Central Tablelands Local Land Services board member and agricultural scientist, who has a strong interest in the equitable sharing of water between the environment and extractive water users.

'The EWAG provides a formal mechanism for all stakeholders with an interest in water management to be consulted and have input into the planning, management and monitoring of water for the environment in the catchment,' Mr Rogan said.

Mr Rogan believes one of the group's main priorities is to provide clearer communications on the use and management of water for the environment.

The EWAG provides advice to Department of Planning and Environment (DPE) on the management of water from a number of sources, including: