The community plays an important role in the management of water for the environment in the Murray and Lower Darling valleys. 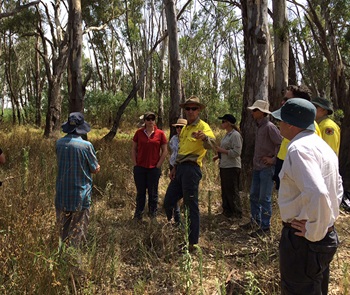 From identifying sites and recommending appropriate infrastructure to timing the flows and delivering the water – it's a team effort with the Murray Lower Darling Environmental Water Advisory Group (MLD EWAG) at its core.

The EWAG is made up of various community and government organisations and is co-chaired by the Murray and Western Local Land Services.

Senior Environmental Water Manager Paul Childs said the EWAG provided a voice for interest groups and a conduit for sharing information about environmental watering with the broader community.

'The EWAG has worked with the Department and partner agencies to deliver environmental watering outcomes at sites across the Murray and Lower Darling valleys,' Mr Childs said.

'Local communities have been the drivers behind several large scale environmental watering events, such as the Jimaringle-Cockran-Gwynnes system and Tuppal Creek, and have assisted in the development of water delivery works programs too.

'The committee's insight has informed the management of environmental flows at Thegoa Lagoon near Wentworth to reduce carp numbers and improve habitat for native fish species.

'Targeted environmental watering has also led to the detection of increasing numbers of endangered Southern bell frogs in the region.

'It's the support and endorsement of the EWAG which has enabled these projects to progress and achieve significant environmental outcomes,' he said.

The Murray Lower Darling EWAG provides advice to Department of Planning and Environment (former OEH) on managing environmental water within the area of operation of the Water Sharing Plan for the New South Wales Murray and Lower Darling Regulated Rivers Water Sources 2016.