The birds are breeding, the frogs are calling and wetlands in the Murrumbidgee valley are showing the benefits of targeted watering events. 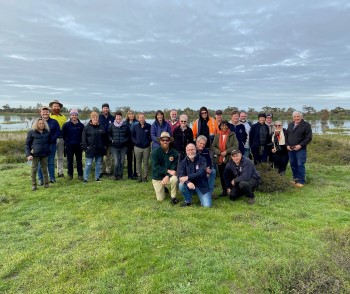 The combined efforts of community members and government organisations are having a positive impact on the health and resilience of local rivers, wetlands and floodplains. The Murrumbidgee Environmental Water Advisory Group (EWAG) provides advice on the management of water for the environment within the catchment.

The group is made up of community representatives, a range of stakeholder groups, First Nations, and government departments . It provides a point of interface between the community and the NSW Water for the Environment program.

The Murrumbidgee EWAG's recent achievements include:

'The application of water for the environment in this system has recently triggered waterbird breeding in species such as cormorants, swans and ducks such as the threatened Bluebill duck.

'The wetlands are also home to recovering populations of the threatened Southern bell frog, whose numbers are now on the increase following many years of strategic flow management.

'With input from the Murrumbidgee EWAG, work is underway to manage rates of recession following ongoing airspace releases,’ he said.

The Murrumbidgee EWAG is made up of representatives from