Often heard but rarely seen, 34 species of frogs live in Sydney. Their natural habitat includes wetlands and marshes, but frogs can adapt and make garden ponds or wastewater ponds on industrial sites their homes.

Frogs are great for your garden and home. They eat insects like houseflies and maggots, mosquitoes, cockroaches, and spiders.

Frogs can travel large distances to find food and suitable habitats to live. They live on land but return to water to breed.

Frog populations are declining around the world for a range of reasons, including habitat loss and disease. Frogs absorb oxygen and other compounds through their skin. This makes them sensitive to pesticides, herbicides and skin conditions such as chytrid fungus.

What frog is that?

The Australian Museum has developed the FrogID citizen science project to help identify and map different frog species by the unique sounds they make or their ‘audio DNA’.

Each frog species has a unique call, which is used by male frogs to attract females of the same species. These calls are often the most accurate way to identify frog species in the wild as many frogs look similar. You can:

Frogs to watch and listen for in your garden

You may hear frogs in your garden at night. That’s the male announcing to the female that he’s found a good place for egg laying.

Frogs you’re most likely to see in your garden or local bush include the common eastern froglet, striped marsh frog, the eastern dwarf tree frog and Peron’s tree frog.

You can help frogs in Sydney by doing a few simple things:

You can create frog-breeding habitat in your backyard by:

Check with your council first: ponds can be a drowning hazard, so you may be restricted in its allowed depth.

When you build your frog pond: 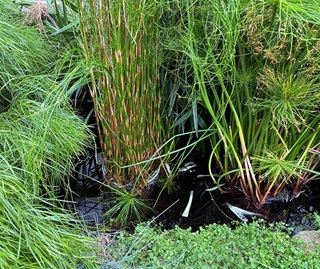 The green and golden bell frog is a large, plump frog ranging from 4.5 to 10 centimetres long. This frog was common along the coast of New South Wales, but is now a threatened species.

The colour of the frog varies from a dull green when cold, to a beautiful pea-green with brassy brown or golden splotches once it has warmed up.

Green and golden bell frogs prefer to breed in water that is unshaded and free of fish that may eat the eggs and tadpoles.

They breed in summer when it is warm and wet.

Unusually for frogs, they are more active in the daytime. You may see one basking in the sun on plants, rocks or reeds.

Learn more about the threats to the green and golden bell frog and how you can help save threatened species.

Share your pictures across social media and show us what you're doing to help Sydney's native plants and animals: