A fungi-loving, rat-kangaroo with a prehensile tail is back in the Pilliga forest for the first time in over 100 years. 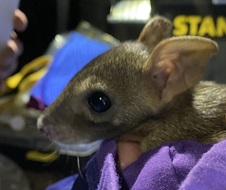 Brush-tailed bettongs were translocated from Western Australia to a massive feral cat and fox-free area in the Pilliga State Conservation Area, south of Narrabri, in late 2022.

Now those 55 pioneering bettongs have welcomed a new generation, with the discovery of the first baby brush-tailed bettong in the Pilliga.

The baby bettong has been named Bella by the ecologists who made the discovery during the first survey of the new population.

The reintroduction of the brush-tailed bettong is a collaboration between the NSW National Parks and Wildlife Service and Australian Wildlife Conservancy, part of a world-leading program to return lost animals to our national parks.

Head of NSW National Parks and Wildlife, Atticus Fleming AM, said the reintroduction is an historic step for the endangered species and for the Pilliga forests.

'The brush-tailed bettong tells a story familiar to many of Australia’s mammals. Foxes and feral cats have driven a catastrophic decline. Once found across much of mainland Australia, it has now disappeared from 99% of its former range,' Mr Fleming said.

'The arrival of Bella is a sign that the new bettong population is on track to reclaim its former home in the Pilliga. It is another huge step in turning back the tide of extinctions in New South Wales – great news for bettongs and for the Pilliga forest.

'Native animals like the bettong are important for the health of forests like the Pilliga – they shift soil around, boosting the health of the landscape by helping with seed and spore dispersal and water and nutrient cycling.'

'Ten extinct mammal species have now been returned to our national parks in the last 4 years including the bilby, the Shark Bay bandicoot and the numbat.

'Seven large feral predator-free areas across New South Wales in national parks from the Pilliga, the outback, the north and south coast and in western Sydney will ensure our most vulnerable species can thrive in habitats free of cats and foxes,' said Mr Fleming.

Of the 22 female bettongs reintroduced to the Pilliga from Western Australia in September, 17 were carrying small pouch young at the time of the translocation.

Dr Vicki Stokes, AWC Senior Wildlife Ecologist, was thrilled to encounter the small individual, saying it’s a positive sign that the species has adapted to its new home.

'We have camera images of females with very heavy pouches and have been busy tracking them since their release, so knew they were doing well.

'We were slightly concerned about the population after two severe weather events in October and November which resulted in extensive flooding. Thankfully the predator-free fence remained secure, and survival of the reintroduced bettongs remains high.

The population of brush-tailed bettongs in the Pilliga is expected to grow to around 2,600 animals.

About the brush-tailed Bettong – key facts