The word emu comes from the Portuguese word 'ema', which means 'large bird'. 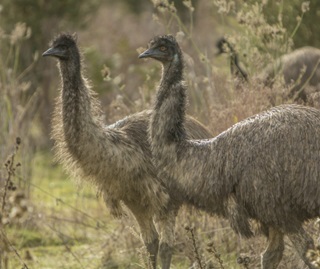 Standing up to 2 metres tall, adult male emus are Australia's largest birds. In size, they are second only to ostriches in the world. Their powerful legs give them great speed, some running up to 50km per hour. At full pace, an emu's stride can measure up to 3 metres.

The emu belongs to a group of flightless running birds with flat breastbones known as ratites. Ratites are the oldest of modern bird families. They include kiwis, ostriches and cassowaries. The emu's feathers are very primitive and look like a form of coarse hair. The special nature of these feathers enables emus to cope with extreme changes in weather.

The emu makes a deep-throated 'drumming' sound by using its tracheal pouch, which is part of its windpipe. The tracheal pouch is over 30 cm long and very thin-walled, and it allows the bird to produce deep guttural grunts. This pouch develops fully during the breeding season and is most frequently used during courtship. The emu's call can be heard from more than 100 metres away.

The emu is a hardy bird and will survive in most parts of Australia's rugged environment, but it avoids thickly forested regions. It thrives in remote places like the dry plains at Australia's centre, the tropical woodlands to the north, and the cold snowfields of the high country.

They eat insects when these are available - such as during grasshopper plagues.

Keeping out of danger expand

Emus do not have the option of flying away if under attack from predators. If attacked from above by other birds such as the wedge-tailed eagle, emus will run in a zigzag pattern. However, at close quarters their main defence is a swift kick or two with their powerful legs. 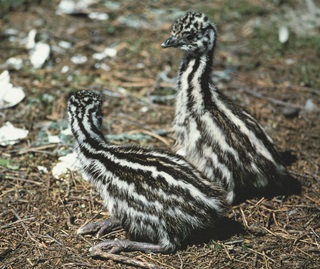 As courtship begins, the female emu's plumage becomes slightly darker. When she finds a partner, the two of them will build a nest of trampled grass in open or lightly-covered country. A clutch of dark green eggs, usually between 5 and 20, is laid in May or June. The female then leaves the nest area, after which she shows no more interest in her eggs or partner. She may simply wander off to join a group of non-breeding birds, or she may find another mate and lay again.

The male incubates the eggs for 8 to 10 weeks. He seldom leaves the eggs during this period, and can lose a considerable amount of weight. He waits until they are all hatched before he and his chicks leave the nest site.

The young emus can remain with their father for up to 2 years. Once fully grown, they may stay in the same area or wander widely in search of food, water and a mate. They become sexually mature at about 18 months of age.

The first attempts to farm emus began in Western Australia in the early 1970s. However, it was not until 1987 that emu farming, based on captive breeding, was found to be a commercially viable industry.

Licences for emu farming in NSW were first issued in 1993 and are closely regulated by the Department of Planning and Environment.

Wild emus are now protected in NSW by the Biodiversity Conservation Act 2016.

Find out more about emu farming in NSW.