There are three species of bell frog in NSW. They are all similar in appearance but can be distinguished by their markings. 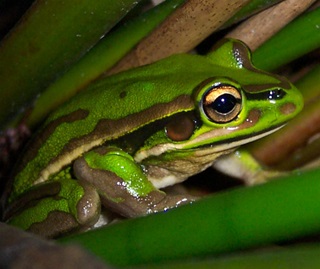 Green and golden bell frogs are smooth-skinned with bright green backs and varying sized golden blotches. A gold line runs from the snout over the eye to the hind leg. The groin and backs of the thighs are bright turquoise to blue-green. 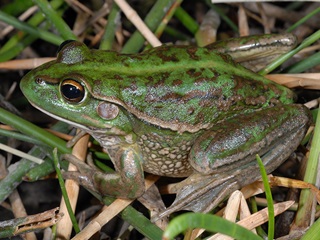 Southern bell frogs are bright emerald to dull olive green with brown or golden marbling. Their backs are very warty (not smooth) and often have a series of black spots on either side of the pale green stripe running down the middle. The groin and thighs are usually turquoise-blue or with a few small pale yellow spots. 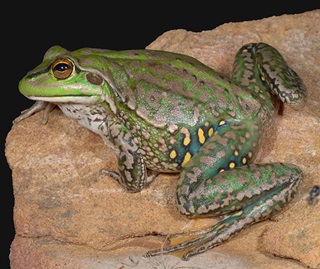 Yellow-spotted bell frogs can be identified by large yellow spots on the groin and the backs of the thighs. They have warty backs with a pale green stripe running down the middle.

Male bell frogs call during the breeding season in spring and summer, and several males will often call together in a chorus. The three bell frogs have a similar call:

These three species of bell frog are found in bulrushes and other emergent vegetation in or at the edges of permanent or semi-permanent water. Lakes, dams, ponds, swamps, wetlands, slow moving streams, drains, culverts and other human modified environments that hold water may all provide suitable habitat. By day the frogs rest on reeds or bask on grassy banks. By night, adults are active on grassy banks or floating on the water's surface. Warm nights, especially following rain, are good times to listen for bell frogs calling. During autumn and winter, they shelter under fallen timber, rocks, other debris or thick vegetation.

Bell frogs will feed on a variety of prey including tadpoles, other frogs (including members of the same and other species), small fish, water snails, and a range of insects including flies, beetles, beetle larvae and grasshoppers.

The breading cycles are similar for the three species of bell frog in NSW. The bell frog breeding season is generally from September to February, and they usually lay their eggs in pools or ponds during spring and summer. Their eggs are laid in a clear gel, not in a white foamy mass like those of many other frogs. The tadpoles and juvenile frogs can be identified by the following traits:

There is considerable concern about the disappearance and decline of bell frogs in NSW. Some species can no longer be found in areas where they used to occur.

The green and golden bell frog used to be common along the coast and adjacent tablelands from northern NSW to East Gippsland in Victoria. Their distribution has declined dramatically and they now occupy only about 10% of their former range, mostly along the coast. Only one population is known from the Southern Tablelands.

The southern bell frog was formerly wide-spread and abundant on the Southern Tablelands of NSW, from around Canberra south to Victoria. In NSW, they are now only known from the Riverina region west of the Great Dividing Range. They are also found in Victoria and Tasmania.

The yellow-spotted bell frog used to be found on the South Eastern Highlands of NSW, from Lake George south to the Bombala area. There are also unconfirmed records from near Orange and Bathurst. The species also occurred on the New England Tablelands. Yellow-spotted bell frogs have not been seen in the wild since the 1970s.

The green and golden bell frog, southern bell frog and yellow-spotted bell frog are now considered endangered in NSW because they have disappeared from many areas where they used to occur. The reasons for the decline of these frogs are not well known. However, some possible causes include:

This Recovery Plan has been prepared to satisfy the requirements of the TSC Act only and is the NSW State Recovery Plan for Litoria raniformis.