The platypus and two species of echidna are the world's only monotremes, or egg-laying mammals. 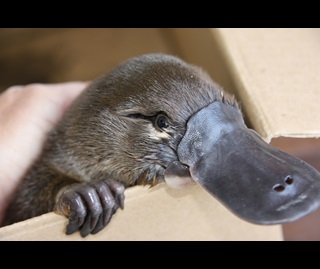 About half the size of a household cat, adult males and females can differ greatly in size and weight. The average male platypus is about 50 centimetres long (head to tail) while females measure about 43 centimetres.

Platypuses are dark brown on their backs and generally light brown on their bellies. Under their long, coarse outer hair is a fine, dense underfur which is woolly in texture. This fur ranges in colour from grey to dark brown.

With their slightly flattened, streamlined body and short, stout legs, they are well-adapted for swimming. The forelegs push the animal through the water, while the hind legs trail behind, acting as stability rudders. When digging a burrow or moving on land, platypuses can fold away their webbed foot extensions. The name 'platypus' means 'flat feet'.

The platypus has no outer ear lobe, and both its eyes and ears close when it dives. It has very sharp vision over long distances, but because its eyes are towards the top of its head it cannot see objects directly under its nose.

The duck-like bill of the platypus is a flexible, soft and very sensitive organ. It helps the animal to find its way, to search for food and to pick up electrical discharges from its prey. Although it has no teeth, the platypus uses grinding plates on the upper and lower surfaces of the jaw to chew its food.

The platypus keeps its body temperature constant by controlling the heat produced from metabolism (all the chemical reactions that occur in the body). It can reduce blood flow to areas of its body that have no fur - particularly its tail, rear feet and bill. Its fur is waterproof and traps an insulating layer of air next to its skin.

The platypus and two species of echidna are the world's only monotremes, or egg-laying mammals.

The name 'monotreme' comes from the fact that these animals have only a single opening for reproduction and getting rid of body wastes.

When the first platypus specimen was sent to England for identification, its appearance was so strange that it was thought to be a hoax. An animal that had a muzzle like a duck's bill and carried a tail like a beaver was said to be an impossibility.

Since then, scientists have come to accept that this Australian native is very real. But it's something of a rarity.

Platypuses are shy animals, and will usually dive underwater to swim away from an attacker. However, if unable to escape, male platypuses will try to stab an attacker with the hollow spurs on their hind legs. These spurs are connected to a sac containing poison strong enough to kill a dog.

Platypuses commonly live in the rivers, streams and lakes of eastern Australia, from the Annan River in northern Queensland to the far south of Victoria and Tasmania. They are found in the major permanent river systems in the south of NSW, west of the Great Dividing Range, and occasionally in South Australia.

Out of the water, platypuses spend most of their time in burrows which have been dug into the river bank, with their entrances usually above water level. The animals use a number of short resting burrows (three to five metres long) as protection from predators and temperature extremes. Burrows used for nesting tend to be more elaborate, with many side branches.

Mainly a nocturnal animal, the platypus can best be seen during the early morning and late evening. It spends about half its time in the water feeding. In fact, it can spend up to 10 hours in the water at any one time. Normally a platypus stays underwater for between 1 and 2 minutes, but if disturbed it can stay underwater for up to 10 minutes.

The platypus usually catches its food underwater, sifting through the gravel and mud of the riverbed. A great deal of mud can be consumed in this process. The platypus fills its cheek pouches with unchewed food, and when it has finished feeding it rests on the water surface to grind and swallow the food. Its diet consists mainly of riverbed animals such as insect larvae. However, it also eats freshwater shrimp, and may catch adult insects on the surface of the water.

Platypus breeding season is in spring, running from October to March in NSW. The animals build a nesting burrow up to 30 metres in length, containing a nesting chamber. This chamber is about 30 centimetres square and is packed with vegetation. Before she lays her eggs, the female platypus plugs the burrow in one or more places. This may protect the mother and her eggs from predators and keep the nesting chamber at a stable temperature and humidity level.

Between 1 and 3 leathery eggs are laid. They are incubated by the mother, who curls around the eggs with her tail laid over them. When the young platypuses hatch, they are fed milk by their mother. Because platypuses do not have teats, milk is transferred from the mother's mammary glands to the skin, and the young suckle her underbelly fur. The young are suckled in the burrow until about 3 or 4 months of age, when they venture into the open to see daylight and the river for the first time.

The biggest threat to the platypus is the loss of habitat, especially land clearing and dams that disrupt the natural water flow, and predation. Natural enemies of the platypus include snakes, water rats, goannas, and introduced animals such as foxes, cats and dogs.

Entanglement in litter, especially discarded fishing line, and yabby traps cause many drowning deaths of platypus.