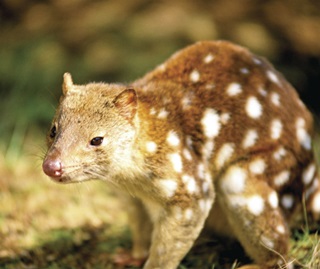 The spotted-tailed quoll is about the size of a domestic cat but has shorter legs and a more pointed face than a cat. Its fur is rich red to dark brown and covered with white spots on the back which continue down the tail. The spotted tail distinguishes it from all other Australian mammals, including other quoll species. However, the spots may be indistinct on young animals.

The average weight of an adult male is about 3.5 kilograms and an adult female about 2 kilograms.

The spotted-tailed quoll is found along both sides of the Great Dividing Range from the Victorian to the Queensland borders. Scattered, unconfirmed records of the species have also been reported in the western parts of New South Wales.

Spotted-tailed quolls live in various environments, including forests, woodlands, coastal heathlands and rainforests. They are sometimes seen in open country or on grazed areas and rocky outcrops. They are mainly solitary animals and will make their dens in rock shelters, small caves, hollow logs and tree hollows. They use these dens for shelter and to raise young.

These animals are highly mobile. They can move up to several kilometres in a night and may have quite large territories. Within their territories, they will have latrine sites where they defecate. These are often in exposed areas, such as on rocky outcrops.

They kill and eat a variety of prey, including gliders, possums, small wallabies, rats, birds, bandicoots, rabbits, insects and reptiles. They also scavenge on carrion and may take domestic fowl.

Breeding season is between April and July. Females breed about once a year and have a gestation period of 21 days, producing an average litter of 5. The young are kept in a rudimentary pouch until they are large enough to be left behind in the den while their mother forages for food. Both sexes mature at about one year of age.

The Quollidor Project has been established under the NSW Saving our Species program to improve the monitoring of quolls in the Barren Grounds-Budderoo region.

The ‘Quollidor’ is the name given to the connected vegetation corridor that links the quoll’s habitat from the South Coast escarpment forests to the Metropolitan Special Area water catchments across to the southern Blue Mountains. 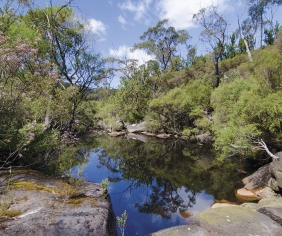 Anything but barren: Barren Grounds Nature Reserve and Budderoo National Park are home to a diverse range of threatened species.