Southern right whales are protected throughout Australia, and are listed as a threatened species in NSW. 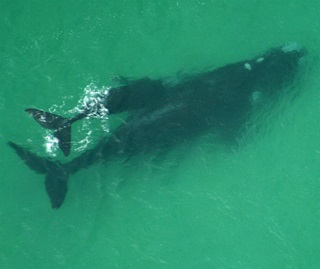 The features of a southern right whale are:

Southern right whales also have a series of natural growths called callosities on the front of the rostrum or head. The largest of these callosities is called the 'bonnet'. Callosities are also found on the whale's chin, on the sides of the head, on the lower lips, above the eyes, and near the blowholes.

Southern right whales feed mainly on copepods, krill, mysids and plankton, among other tiny crustaceans. They are baleen whales - they don't have any teeth, and feed by filtering food through 220-260 baleen plates which hang from each side of their upper jaws. The baleen is up to 2.8 metres long, and is fringed by long, fine, greyish bristles. Southern rights hunt their prey by swimming with their mouth open and trapping their prey in their baleen bristles, while also filtering water out of their mouth.

Where can you see them? 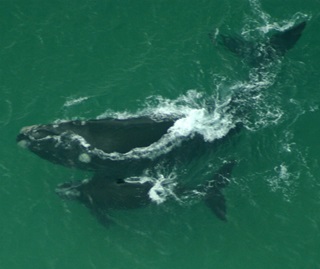 Southern right whales visit southern Australia during the winter months, and they are increasingly found in NSW waters.

The whales are often seen in very shallow water, including estuaries and bays. They have even been known to swim in the surf zone. During these times, they are not known to strand.

Sometimes you can even be lucky enough to see mothers and calves together. They may play for a few hours or days in the same location, and it is important not to disturb them at these times. The calf is learning the life skills it will need before it returns to the Antarctic, and the mother can be very protective of her young.

Closer up, you can see southern right whales:

In the early history of NSW, the southern right whale was a mainstay of the colony's export industries. It was thought that it was the 'right' whale because it swam slowly, floated when killed, and yielded high quantities of oil and baleen (whalebone). The whales were plentiful, and ships would stay for a while after bringing convicts to the colony to let their captains hunt southern right whales.

Southern right whales are protected throughout Australia, and are listed as a threatened species under the NSW Biodiversity Conservation Act 2016.