Wombats grow to about 1.3 metres in length, and can weigh up to 36 kilograms. They have a large, blunt head with small eyes and ears, and a short, muscular neck. Their sharp claws and stubby, powerful legs make them great diggers. Wombats have been known to live for up to 27 years in captivity.

There are 3 species of wombat, two of which occur in New South Wales (NSW): 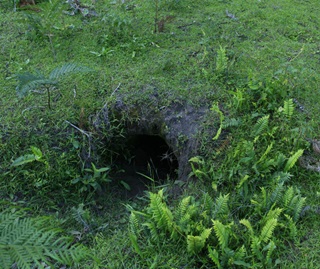 The common wombat lives mainly in wet, partly forested areas on the coast, and on the ranges and western slopes. The southern hairy-nosed wombat prefers dry, open country.

Both species live in burrows, preferring well-drained soils that are easy to dig in. The burrows, which are often built on the sides of gullies, can be up to 30 metres long, and several metres deep. Wombats generally stay in the burrows during the day, kept warm in winter and cool in summer. They will often share their home with other wombats.

Setting out their territory

Although wombats will share burrows, they are possessive about their particular feeding grounds. They mark out these areas by leaving scent trails and droppings around the boundaries. If an intruding wombat moves in on their territory, it will be discouraged through a series of snorts, screeches and even a chase.

As a result, the wombat population of an area is dependent on the number of available feeding grounds. A young wombat can sometimes take the place of an adult that has died, but often it will be forced to move to another area to find its own feeding ground.

Wombats spend between 3 and 8 hours each night grazing on their favourite food, which is native grasses such as the tussocky 'snow grass', wallaby grass and kangaroo grass. They will also eat sedges and the roots of shrubs and trees.

They cut their food with sharp, chisel-like front teeth which grow continuously.

A wombat may wander up to 3 kilometres each night looking for food.

A wombat can reproduce after it reaches 2 years of age. Mating occurs between September and December, and usually results in one offspring. The newborn wombat, which weighs only 1 gram and is less than 3 centimetres long, has to crawl from the birth canal into the mother's pouch.

This pouch faces backwards, which stops dirt and twigs getting caught in it when the mother digs. The young wombat will stay in the pouch for between 7 and 10 months.

Because of settlement and agriculture, wombats in most areas have been pushed into the rugged hills and mountains. As long as they remain in these areas, wild dogs and collisions with cars are more of a threat to these marsupials than landowners. However, because of their habit of wandering down to the flats to enjoy the tasty morsels growing there (knocking down fences on the way), they are sometimes killed by farmers.

Wombats have also had to compete with introduced animals - such as cattle, sheep, and particularly rabbits - for food. This competition appears to have been a major factor in the decline of the northern hairy-nosed wombat in NSW.

Wombats are protected under the NSW Biodiversity Conservation Act 2016. It is an offence to harm a wombat unless a licence is obtained from the Department of Planning and Environment.