The International Union for the Conservation of Nature Green List of Protected and Conserved Areas is a global certification program that recognises and celebrates well managed protected areas.

Three reserves managed by the National Parks and Wildlife Service (NPWS) were among the first 25 reserves in the world to be included on the International Union for Conservation of Nature (IUCN) Green List that was launched at the 2014 World Parks Congress in Sydney. These are:

As part of the rigorous certification process, all three reserves were successfully re-listed after their first 5-year review in 2019. Re-listing involved demonstrating that the reserves met high standards of protected area governance, design and management and could also show positive outcomes for conservation of natural and cultural values. 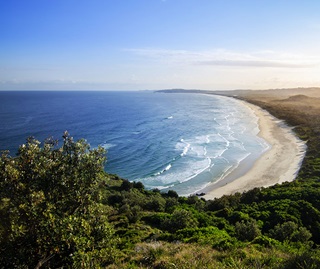 Park managers face significant challenges in protecting highly sensitive biodiversity and cultural values in an urban and busy tourist setting with more than 100 neighbours while managing more than 1.5 million visitors annually. For example, undertaking ecological burns that are critical to maintaining healthy coastal ecosystems and maintain cultural practices is extremely challenging due to the real and perceived risk to life and property from bushfire.

Despite the challenges of managing these reserves in an urban setting, much has been achieved. Invasive weeds have been reduced to a low and manageable level, key habitats of ecological and cultural importance rehabilitated, and water quality in local wetlands and creeks improved.

The incorporation of scientific expertise and cultural wisdom in management priorities and approaches together with exceptional dedication of NPWS staff and Arakwal people has resulted in highly successful conservation and cultural outcomes. This includes successfully rehabilitating the world's last remaining stand of Byron Bay Graminoid Clay Health, home to the endangered Byron Bay orchid – of cultural significance for Arakwal people.

Traditional owner and NPWS ranger for Arakwal National Park Norm Graham put it succinctly "Silence has been broken through joint management that gives community a voice and power in decision making." 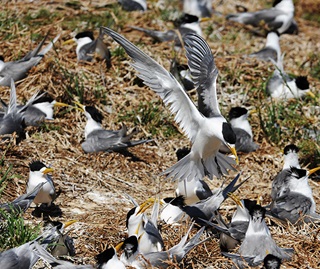 Montague Island Nature Reserve represents an exceptional example of protected area management. The island supports a unique assemblage of 9 seabird species that breed on the island, including shearwaters, little penguins and petrels from as far away as the Arctic, New Zealand and the Southern Ocean.

Three of these species have only recently been recorded on the island – likely attracted due to the improved ecological condition. These improvements have been achieved due to the long term dedication of NPWS staff, scientists, volunteers and local community. Working together, mice, goats and rabbits have been eradicated and an ambitious program of weed removal and revegetation has restored large areas of habitat for nesting seabirds with more than 80,000 native trees and shrubs replanted.

Montague Island is known as Barunguba by Aboriginal people. The island's significant cultural values as a ceremonial area and resource gathering place for Aboriginal People are recognised and protected by National Parks and Wildlife Service. Features and species that are part of Aboriginal stories and connection with Barunguba are evident on the island and protected by restricting access to these areas. The cultural values will be further strengthened through the recent declaration of the island as an Aboriginal Place.

Montague Island is one of the few places in the world where visitors can enjoy a unique wildlife experience that includes thousands of breeding seabirds, penguins, shorebirds, fur seals and whales in the peak season and visit a well preserved 19th century light station and keeper's cottages. The local community is very supportive of the management of the island, with over 30 local people registered as volunteer tour guides.

It is also one of the best places to undertake wildlife research with dedicated housing and facilities for researchers and regular transport to the island with easy access to seabird, shorebird and seal colonies, making it the 'perfect laboratory'. The long-term data set generated by the world's longest running continuous seabird surveys on Montague Island provides an excellent basis for analysing the impact of weather events and climate change.